Everything makes its way to the sea, and none more so than plastics. There are now five floating plastic islands in different oceans across the world, with the largest island even having a name, the Great Pacific Garbage Patch, which is three times the size of France. Lying between California and Hawaii, it is the world’s biggest ocean waste repository, with 1.8 billion pieces of floating plastic that kill thousands of marine animals each year.

Of course, we now know that 35% of waste originates from wealthy countries and 50% of this waste is exported to developing countries. At the same time, 70% of developing countries mismanage their own waste and lack the infrastructure to collect and recycle waste. Finally, 90% of all plastic waste enters the oceans through rivers, mostly through a few hundred rivers in Asia, Africa and Latin America.

Many projects have sprung up looking to tackle the problem of plastic pollution at the end of its journey. On Bitcoin Beach in El Salvador, one of the projects funded by Bitcoin philanthropists is the collection of plastics in the river before they reach the sea.

Plastiks.io is another project that addresses the end games, identifying credible recycling and cleanup projects typically in developing countries that are funded by business or philanthropic individuals in the west.

Canada-based Plastic Bank also works to incentivize stewards to collect plastic from the oceans and, to date, claims that its Ocean Stewards have stopped more than 64 million kilograms of plastic from entering the ocean.

In 2014 in Malaysia, students from Nottingham University, then led by a co-founder of DeFi app Alluo, Remi Tuyaerts, were involved in a number of social enterprise businesses, including one that uses black soldier flies to eat waste and another that converts plastic into beanbags employing the homeless. These businesses are still thriving.

In 2019, Manila Bay Beach in the Philippines was filled with so much plastic waste it earned the nickname “rubbish beach.” Then, within a couple of months, it was reclaimed in a major cleanup. Initially, 5,000 volunteers removed over 45 tons of garbage. Prior to the onslaught in 2018, Bounties Network paid fishermen to collect trash and rewarded them with tokens, and the continued payments helped fund fishermen’s precarious livelihoods and keep the beach clean.

“Bounties Network got a partnership with a local digital payment provider, Coins.ph, to make sure people could exchange the Ethereum into fiat,” says Simona Pop, co-founder of Bounties Network.

Mark Beylin, then CEO of Bounties Network, documents the impact of the cleanup on the local supporters:

“One of the most interesting dynamics we saw throughout the weekend was the manner in which people shifted from being extrinsically motivated to intrinsically. Many who attended the event came out simply because they saw the opportunity to earn supplemental income. However, as we engaged with participants on an individual basis, we learned about the sense of personal accomplishment they felt in collectively improving their environment.”

However, these projects are all trying to tackle the consequences of littering and its impact on developing countries. What about the projects tackling the issues closer to the source?

A revolution in geography

In 2008, Seán Lynch, founder of OpenLitterMap and LitterCoin in Cork, Ireland, discovered GIS, the mapping software for real-world data such as what governments use to map roads or pipelines and — as a gamer — saw that it was very similar to many of the maps in his games. He then wondered whether he could use this tool to map real-world data into a game. The next question was the use.

“Where I lived in Cork, I had to pass a litter blackspot on my way to college. This was in 2008, and I wondered if I could use GIS to plot this illegal dump onto a map and start a conversation locally. I knew that while litter generally is a global problem, if you could identify local issues, then you might generate interest and, from that, generate action.”

This was in 2012, and Lynch was puzzling away about how to capture the data when the perfect tool in smartphones arrived.

Sweden: The Death of Money?

Bitcoin 2022 — Will the real maximalists please stand up?

“I was traveling and working as a scuba diver in Thailand, which I adored. I had a really close personal connection with the ocean. Other divers and backpackers like myself picked up a lot of litter from the beaches every day. But it was only with the advent of social media that we realized how badly the planet was polluted,” he says

“One day, I remember seeing someone with an iPhone on the beach, and they were using it to track their location, and this was my next ‘aha’ moment: Why not use this increasingly common mobile device to take photographs and document the litter?”

Inspired by this revelation, Lynch returned to his native Cork to study for a master’s in GIS to fully understand how to use technology to solve the pollution problem. He also realized that the mere presentation of the problem, however huge, would not be a sufficient motivator — it had to be more immediate.

Lynch evolved his thinking into a citizen science platform where data can be crowdsourced on a hyper-local basis:

“People are being asked to make changes to help mitigate climate change, but I can’t pull a CO2 molecule from the air and show it to you. People hear about the environment as some far-away place being polluted, and although it’s true, this approach is disconnected from most people’s day-to-day reality. But if I can help people discover litter on a more local level, like when people zoomed into their home on Google Maps for the first time, I have your attention.”

The timing in terms of the evolution of geography is also on Lynch’s side. He explains that the study of the planet has gone through several iterations and paradigm shifts. Up until the 1960s, the study of geography, and the practice of teaching it, is largely a descriptive process. Then, a computational revolution occurred where universities started getting access to computers and governments started putting satellites into space.

“Suddenly we were able to take this quantitative information about the planet and store it on a computer. The geographers of the world realized they could not only describe how landforms looked but they could actually count things such as the amount of rainfall or how green the grass is. It’s referred to as the quantitative revolution in the study of geography.”

The most engaging reads in blockchain. Delivered once a
week.

This revolution, combined with approximately 4 billion people owning a powerful data collection instrument — their smartphone — gives birth to citizen science. It is no longer just a few experts counting and collecting geographical data but thousands of possible data aggregation points.

Now it is just a case of making the data count and finding out what data is relevant.

In 2014, Lynch started following Bitcoin and particularly liked the concept of proof-of-work, where miners are rewarded for securing the network. When Ethereum launched a few years later, Lynch saw that he can create his own token, which gave him another “aha” moment.

“I had been toying with the idea of using bracelets to reward people, but while an attractive idea, it wasn’t practical, so the idea of rewarding people with a token was infinitely more compelling.”

And so, in 2015, Littercoin was born. In 2022, Lynch got his first funding from Project Catalyst from Cardano.

“Mind you, Littercoin is not like other crypto. It won’t be listed on any exchange, and you won’t be able to buy it — it can only be earned by downloading the OpenLitterMap app and starting recording the litter.”

Lynch argues that there is a low barrier to earning the token and notes that it will only be spendable at pre-approved stores, and these stores will be in the zero waste stores in the climate economy.

Since launching the app in April 2017, there have been 6,500 users, with new people coming on board daily. This growing community has been responsible for 500,000 tags and more than 350,000 photographs.

“And if you keep the map open, you can see the updates in real-time. So, if someone spots some litter and picks it up anywhere in the world, you can see it update on the map. We are creating a global community working to rid the planet of litter,” Lynch says.

“We give the tools to create the knowledge, and that is a very empowering thing to do.”

To make the process fun, Lynch has created a global #LitterWorldCup with the countries all competing to be the top. Ireland was No. 1, but the Dutch community has since overtaken them. Maybe litter collection begins at home after all.

Crypto, Meet Fiat. You Two Should Get A Coffee Sometime

Crypto as a ‘public good’ in the 22nd century 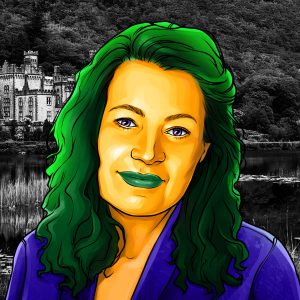 Jillian Godsil is an award winning journalist, broadcaster and author. She changed electoral laws in Ireland with a constitutional challenge in Ireland's Supreme Court in 2014, she's a former European Parliamentary Candidate, and is an advocate for diversity, women in blockchain and the homeless.