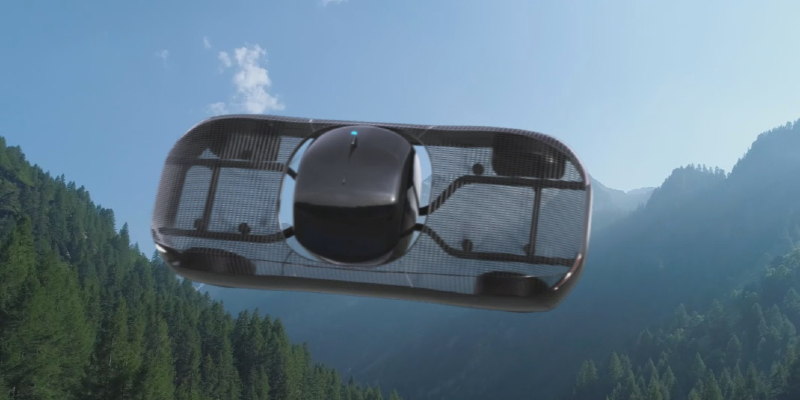 It’s a bird! It’s a plane! No, it’s a… flying car? That’s right, folks. The future is now, and flying cars are (finally) a reality. To simplify the concept, a flying car is a type of personal aircraft that combines the features of an aeroplane and a car.

The flying car trend is rising as companies race to develop the first commercially viable model. Several prototypes have been developed recently, and several companies are vying for the first flying car manufacturer title. Recently, SkyDrive got $66M funding to develop flying cars and cargo drones, also there was a flying motorbike startup which was in the news, earlier this year.

The market for flying cars is expected to be worth billions of dollars, and there is significant interest from major automakers and tech giants alike. Flying cars could revolutionise transportation and make getting around much easier, faster, and more efficient.

The latest one to enter the market is the California-based Alef Aeronautics! It is a sustainable electric transportation company designing and developing a road-legal passenger car capable of achieving vertical take-off and forward flight.

Recently, the company unveiled “Model A,” the only flying car with street driving and vertical take-off. If it reminds you of Bruce Willis’ flying taxi in the 1997 film “The Fifth Element,” you are not alone.

The primary focus of Model A is to fit it within the existing urban infrastructure for driving and parking.

The flying car comes equipped with

It also has key safety components, including a triple to octuple redundancy of all key components, real-time thousand-point diagnostic, pre-flight reject start diagnostics, obstacle detection, and avoidance, among others.

The Alef “Model A” flying car has a driving range of 200 miles and a flight range of 110 miles. Alef has been test-driving and flying the full-size prototype since 2019.

Regarding the design, Alef Aeronautics has employed gimbaled cabin design along with elevon system to provide a smooth, stable ride and flight, keeping occupants stable.

However, when it comes to the streets, the company has taken the unusual steps of designating the Model A as a “low-speed vehicle,” which will go around 20 and 25 miles per hour (32-40 km/h). Despite its sporty looks, Model A will compete with some customised golf carts in terms of speed.

The company doesn’t expect you to put a lot of miles on the car since it’s mainly for last-mile stuff, and they expect you to do most of your travelling by air.

According to the company, the Alef flying car was developed using the latest hardware and software technology advances, ultra-light and ultra-strong components, software simulators, and analysis, and rigorous flight testing.

The company is expected to begin production and deliveries in Q4.

With additional models in development, Alef is working towards the four-person sedan, Alef Model Z, scheduled for introduction in 2035, priced at $35K. It can fly 200 miles with a driving range of 400 miles.

Alef’s CEO, Jim Dukhovny says, “The Alef Model is a modern solution for both urban and rural transportation needs in the 21st century because it is the fastest and most convenient transport ever created from the point of origin to the final destination. Furthermore, by enabling consumers to choose driving or flying mode, the Alef flying car allows the optimal path depending on road conditions, weather, and infrastructure.”

Brains behind Model A

The Alef founding team — Constantine Kisly, Pavel Markin, Oleg Petrov, and Jim Dukhovny has a combined experience of over 70 years in engineering and technology development and has been working on the Alef flying car since 2015.

The company has earned early support from distinguished investors and industry veterans, led by Tim Draper (who, among others, was one of the first venture capitalists to invest in Tesla), former head of Defense Advanced Research Projects Agency (DARPA) and Ford

How will flying car help in the future?

Flying cars are a way to reduce traffic congestion and increase mobility in cities. They could also help to reduce greenhouse gas emissions by taking advantage of new technologies that allow for electric propulsion.

One of the main advantages of flying cars is that they would be able to take off and land vertically, meaning that they would not need long stretches of road or runway. This would make them much more flexible than traditional cars or planes and allow them to access many more places.

Another key advantage is that flying cars would not get stuck in traffic jams. This would dramatically reduce travel times and make it easier to get around cities. In addition, flying cars could help reduce accidents as they could avoid obstacles on the ground.

Overall, flying cars offer several potential benefits that could improve our lives in the future. While there are still some challenges to overcome, such as developing safe and reliable technology, it is clear that flying cars could have a big impact on the way we live and move around cities.